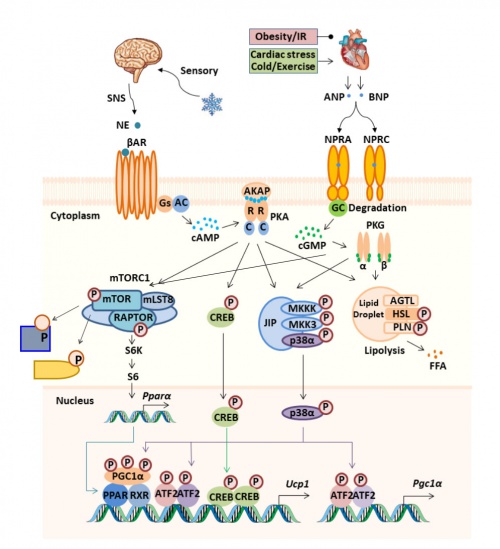 Our research interests started with the beta-adrenergic receptors in the adipocyte, since all three (β1AR, β2AR, β3AR) are present to varying degrees and depending upon species. Our first study looked at the βARs in the ‘obese’ ob/ob (Lepob) mouse and its lean littermate. The β3AR genes had just been cloned. Up until this time we only knew of β1AR and β2AR, and there had been many pharmacological studies examining the βARs in rodent adipose tissue. Classic pharmacology suggested that there was something unusual about adipose tissue, but since it was also such a ‘messy’ tissue to work with, it was a niche area of work. Given the tremendous adipose mass in the ob/ob mouse, researchers were trying to understand why the response of the adipose tissue in the ob/ob mouse to catecholamines/β-adrenergic agonists to increase cAMP was so low. Researchers had tried to study the βAR(s) in rodent adipose tissue using the tools of the day, such as the radioligand [125I]-cyanopindolol (CYP) and the ‘beta-blocker’ propranolol. And although the cAMP response of adipose tissue of the ob/ob mouse was quite refractory, investigators could not find any differences in the expression levels of β1AR or β2AR. The pharmacologic work of Jon Arch and colleagues (Arch et al. Nature 1984) shed important insight that there was indeed something different about the βARs in adipocytes: brown adipocytes in particular, to which they gave the term ‘atypical β-adrenoceptor’ to describe it. This ‘atypical’ receptor was later recognized to be the β3AR gene, which was discovered as a result of low-stringency cloning efforts following the isolation of the rodent and human β1AR and β2AR genes. It was soon realized by Granneman and others that the tools of the day hardly interacted with the β3AR at all; so it had been hiding in plain sight. Our first paper (Collins et al. Mol Endo 1994) described that in the ob/ob mouse the expression of the β3AR was practically absent, and that levels of β1AR were also quite low. What was realized was that the prior pharmacology of the adipose tissue had been distorted by the presence of this third βAR. We went on to show (Collins et al. Int J Obesity 1999) that all of the congenital models of mouse obesity: ob/ob, db/db, etc. exhibited a similar pattern of perturbed expression of the βARs. The underlying mechanistic reason for this, however, has still never been explained.

Most of the topics in the lab that have eventually become major efforts were the result of ‘accidents’ or ‘strange’ observations. This proved to be the case for identifying the p38 MAP kinase as a downstream mediator of PKA to activate the transcription of the uncoupling protein-1 (UCP1) and Ppargc1a (PGC1α) genes (Cao et al. JBC 2001; Cao et al. Mol Cell Biol 2004; Robidoux et al. Mol Cell Biol 2005), as well as for how the cardiac natriuretic peptides and cGMP promote a parallel pathway to the catecholamines and cAMP to drive adipose ‘browning’ and energy expenditure (Bordicchia et al. J Clin Invest 2012). The most unexpected ‘mistake’ that turned out to be a major topic in the lab was that βAR agonists could activate the rapamycin-sensitive mTOR complex (mTORC1) and that this process appeared necessary to both promote ‘browning’ of white adipose tissue in response to cold or selective β3AR agonists, as well as the proper development of the interscapular brown fat (Liu et al. J Clin Invest 2016). The mechanism is, at least in part, driven by the direct phosphorylation of mTOR and Raptor by PKA (and we now know that the natriuretic peptides and cGMP do the same thing., through the cGMP-dependent protein kinase (PKG) (Liu et al. Mol Metab 2018). Currently as shown in the cartoon, we have been searching for those substrates of PKA-activated mTORC1 with our collaborator Dr. Marcus Krüger, and are following up on some very promising hits.